I'm a Hypnotherapist, and while I was fighting my own battle with my life, I put together a self-acceptance session. Because I found it soooo helpful, I decided to release a copy to the community so that other people who benefit from it. December of 2006 I released a new version, and put it on my clickcaster site.

I was just out looking at the site and noticed there were statistics, which I then looked at. I'm pleased to find out that almost 700 people downloaded the session since I uploaded it. Even more interesting is the fact that 8 people have subscribed to the site, which I didn't even know folks could do. So I'm going to have to pay a bit more attention to the site, and put more up there.

So if you're one of the people who read my blog, and downloaded a session from my site, I just have to say thank you!
Posted by Samantha Shanti at 15:03 No comments:

So back on the 8th I saw my Doctor for a "routine" physical. To my alarm my blood pressure was unacceptably high (yeah, that's a shock) and we decided it was time to do something about it. My poor little legs were swollen up like sausages, which meant I was retaining water too, so my Doctor Started me on a combination ACE and water pill. She also said she wanted me to come back in a month for a followup. Scheduling and so on made it easier to go down yesterday.

Despite a rough, strange start to the day, it was a good visit.

The day started rough, and weird. I was taking a shower and realized I left my towels in my room, which would make drying off a bit of a problem. So I stepped out of the shower, went back into my room, grabbed the towels and was rushing back to the bathroom when my foot went out from under me. Concerned I might do some serious damage on the way down, and lacking anything to grab onto to check my fall, I tried to control it. While I got a nasty rug burn on my right knee as I came down hard on it, I managed to turn my accident into a gymnatics move.

All the time at Curves paid off as I landed in a split on the bathroom floor. I didn't even know I could do a split! I was honestly more stunned I could do a split than in pain from the knee. Got up and looked at my poor knee, which looked more like road rash than anything, and got back in the shower. When I got out of the shower as I sat on my bed wrapped in a towel, I spent fifteen minutes doing Reiki on my knee.

Finished getting ready, and left on time for a change to start the drive down to Philly. I wanted to get started early because my doctor's office had moved, and I wanted to make sure I could find parking nearby. So I drove around a bit, found the office, and miracle of all, found a spot on the street right by the new office. Psych!

Went into the Doctor's office, checked in and found the powder room. I was a full hour early. So I figured while I waited I'd do some light reading, and asked the receptionist for copies of my last lab results. She chuckled and said "You call that light reading? Wow, I'd just grab a magazine!" Well the labs were a sight to see, I was floored and so pleased!

My whole life, blood chemistry results for me were always weird. Nothing terrible or dangerous, just results that never quite fit into so call "normative" ranges. These labs were so pleasing because for the first time in my life they were, with three understandable exceptions, perfectly normal and withing normal values for a woman. A woman of 20! This was so cool, I wasn't just normal and healthy, I was better than my age!

Now this was also the first set of labs I'd seen post-op, and the ranges were listed in terms of female norms, not male. There isn't a dramtic difference between the two, but there is one, and this is the first set of my labs I've seen. Since all my records have long since been changed, and everything has long since been listed as ever more female, the labs were worked up that way too. What was so cool however is the various things that over the years were off just a bit, were spot on. Everything was right were it was supposed to be. Nice normal female ranges, which had been my suspicion all along when I was getting strange numbers.

So I'm a happy girl, and it is just one more indication that yes, I am intersexed. Thankfully now having dealt with it, and brough my life into sync, even my blood tests come out normal. So strange, but so cool!!!

Other news from the visit is my diastolic pressure dropped twenty points, and I lost five pounds! Such a damn fine thing!

I left the office with updates on my perscriptions, and an official "attagirl" from my doctor exactly three minutes before my shceduled appointment! It was a slow day for the office, so they were able to get me in way before my scheduled time. The drive back was as peaceful and uneventful as the drive down and I treated myself to dinner at Taco Bell. I also found out that in whatever way it's happened, my stomach has shrunk, and I'm just so totally eating less. This is also a good thing!

So, it was one of those days, a really good one!
Posted by Samantha Shanti at 18:52 No comments: 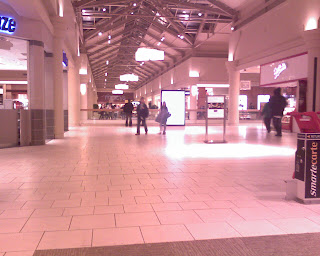 Hard for me to believe, but I'm in the mall, walking laps! Had some dinner at Tony's pizza, took a tranquilizer, and came over to the mall. Once many years ago I'd come here to walk laps because each trip around was a mile. I know, I measured it to be sure. So far tonight I've managed two full laps. I'm on my third lap not and decided to rest a few moments.

The difference of course is several years of therapy, chemicals, and a mp3 player full of albums to take my mind off where I am I'm listenting to Neil Diamond's "Glory Road" at the moment, a two CD set full of his best stuff. When that's done I have a random playlist of Alannis Morisset's "The Collection" and the Chris Issac's "Best Of Chris Issac" to keep me distracted. It's helping keep me from freaking out from the noise and people.

When you figure that Friday nights are typically the busiest, I'm doing okay...
Posted by Samantha Shanti at 19:43 No comments:

Wow, I have just the healthiest sleep habits!

It's just after four, I'm sucking on a purple flavored tootsie roll pop, just about down to the chocolate now! No I didn't count the licks but I enjoyed each and every one of them! While doing this I'm reading "Plum Lucky" by Janet Evanovich really enjoying that too!
Posted by Samantha Shanti at 04:15 No comments:

So I'm planning on going home to Colorado. I'm working on getting everything ready, and know that I'm going to have to part with certain things in my life now because they are geographically undesirable. My current Doctor's and my Therapist especially are going to be sorely missed.

Over two years ago I walked into Maria's office needing help staying alive. I was ready to be dead, too much pain, nothing was working and I couldn't get help saving my life. Maria challenged me without pushing me harder than I could go, helped me find my legs so to speak and learn to start walking again.

It's been an amazing journey, and kinda sad that this part of it is ending.

Posted by Samantha Shanti at 21:10 No comments:

Joe: "Resistance is futile, you will be assimilated!"

What? For some reason it just struck me how the HRC logo looks kinda like a 'happy' BORG cube, glowing from within, that horrible yellow light that spells DOOM. Maybe I'm over reacting, and goodness knows I'm trying hard not to do that, but the writing is on the wall. It's not pretty, and I will NOT be renewing my support of the HRC this year. Or probably ever again. Yeah, right, it was for the greater good, do things in steps. No, it's called bait and switch, and there is no way to hide that. Humanity lost big with the ENDA debacle, all of humanity, not just the "T" portion. With Joe and his political agenda, HRC doesn't stand for equality.

So do we have to put up with another 4 years of Joe? What's HIS term limit ... Oh, wait he's a hired gun, we can fire him can't we? Not another 4 seconds of Joe, let alone four more years. Write the HRC and "JUST SAY NO TO JOE!!!"

Posted by Samantha Shanti at 00:51 No comments:

Don't know why I didn't think of this sooner ...

... but I've added a button to the side bar so folks who read my blog can send me an e-mail directly without having to post a comment. Kinda cool! In this day and age of robots, scammers, skimmers, and automated online things whose name starts with 'S' and have too many legs, I made it in FLASH, because it was quick and easy. Plus to be honest, I wanted the star writting in my name because I thought it would look cool.

So that's the little baby right there! I think I've even now figured out how to put flash into a post. Now this is cool!
Posted by Samantha Shanti at 00:03 No comments:

Which despite the current turmoil in my life, and the upheaval, it was! Unlike Christmas, which I spent alone, New Years was spent having fun with friends and family.

Nothing extravagent or outrageous, just a nice dinner, then watching some DVD's until it was time for the ball to drop. About the only really bad part of new years was the unfortunate vistage of what's left of Dick Clark. I feel for him, I do. I know how much strokes and other medical issues can take from people, but did he really, really HAVE to be seen on TV that way?

Dick Clark was this ageless, timeless, prince of a man once upon a time. He never seemed to age, didn't lose his energy or vitality, from the first time I saw him on "American Bandstand" on, he was always amazing. Yes, I remember "American Bandstand" and I know that can make me soom old too, but hey, it's life you know? Anyway, I choose to remember the Dick Clark BEFORE his stroke, and I hope to god he retires gracefully and enjoys the time he has left. One of these days he's going to join Bob Hope and Bing Crosby on the great stage in the summerland.