A bit of permanence in an impermanent universe . . . 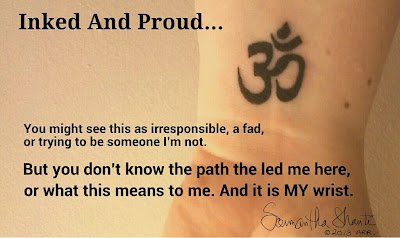 I put this image together after seeing some other ideas online and posted it to facebook, but it's been rolling around in my head and heart for some time since then.  It's come to me however in the almost a week since I finally became a tattooed lady, that this means even more to me than I'd first thought, or could even imagine.

I should start by saying that some of the things that everyone else I know and have talked to about getting inked never happened to me.  It was over the course of the last eight years I've been considering this that I have a less sensitive part of the body inked first, because the inside of the wrist hurts more than other parts of the body.  It was suggested I get a really tiny intro tat someplace else on my body so that I'd know if the pain was going to be a problem.  It was also mentioned that the endorphin rush after the tat was done would make the pain so worth it, and that people often get addicted to being inked because of the high afterwards.

Well I missed out on all of that.  As Amber was inking my wrist I sat there completely relaxed and comfortable chatting with her like we were having tea.  To me is felt simply like she was drawing on my wrist with a pen.  No pain at all.  And afterwards, no endorphin rush either. :(  So no chance I'll become addicted to being inked.  Thankfully, I can and do get endorphin rushes when I'm out cycling and I break through that wall, hit the zone where it's all flow and go.  So I don't feel cheated.  Drugs and pain however are not what I'm here to talk about.  Which is a good thing, lest I bore you all into a coma.

What struck me, aside from all my existing reasons for finally taking this irreversible step and permanently altering my body is something I'd not expected.

Over the years I've lost nearly everything I've ever owned more than once. I've been profoundly homeless. Even now, the remains of my life and my marriage sit in a storage locker a thousand miles away.  I'm spending an absurd amount of money on the storage locker until I can get there, save what I want to keep, and donate the rest to Goodwill.  Of course the money I'm spending to keep this locker is money I could be saving every month to get out there and get what I wanted to keep out of the locker.

I'm a Buddhist, and aware of the suffering attachment and impermanence can bring. I'm not really so wrapped up in the property that's there.  It's stuff that I've not really had any major access to since I put it in storage almost a decade ago.  Yup, nearly 10 years ago.  I'm interested in saving some of the memories there, and selling some of the valuables there to then be able to finally move back to Colorado, and start saving for a trip to California.  But most important are reclaiming some of the good memories that are locked away in that storage locker and sharing them with others.  Like of all things the video of our wedding that Earl didn't want and his parents did.  On it, is my brother, being his usual priceless self, a video my sister-in-law never saw because she wasn't married to my brother at the time.  A brother now long gone.  So it's about closure, it's about the future, it's about doing something right.  Because I have worked hard to rebuild my life after Earl and his folks, and having then the locker go into default and getting the hit on my credit report.

So I'm working towards getting that done, but it came to me that no matter what happens I've reached the point that if I have to, I can walk away from what is in the locker. I won't like once again losing everything from my past, but I can do it.  And it'll be memories, opportunities and good credit lost - again.

Which brings me to what struck me about this simple bit of ink.  For the rest of this lifetime, it's mine. No one can take it away from me, it's something I invested in that I will own for all the days of my life.  It's a level of permanence I've never had before.  It's kinda stunning and amazing for me.  I own it. It's also not something that can be stuck in a box, dropped in a storage locker, and left there for ten years.  Even if I lose everything including even my clothes, I will still own and have with me this ink.  It's a lovely bit of permanence in an impermanent universe . . . this means more to me than I possibly could have imagined in the eight, more years that I've wanted this tattoo.  It struck me suddenly, but feels really good. Standing naked in a spring rain, this will be with me, part of me. It's mine, I own it, and regardless of what may happen for the rest of my life, I'll own this and what it represents to me.  That's a sudden and powerful feeling for someone who has lived a life that is an exercise in impermanence.  I'm kinda stunned.