Droid does? Oh yeah, Droid DOES!

So the media has been having a ball with Droid and what it does. Verizon has been marketing the hell out of it's new Droid phone. All the new commercials about what Droid does, the smart phone gone just over the board into magic. Ask your phone to find something and it tells you who to get there? Yeah, that's GPS. They've been around for a while. However there's a piece of high tech hardware you have to program, load with maps and data, learn to use, and then pay attention to the little screen when it beeps and tells you with text on the tiny screen to turn to make it all work. I know, I had one, and honestly it was a bunch of work to, well, make it work. In the end, it really wasn't worth all the time and effort I had to pour into it to make it work. In that regard, it wasn't a hammer.
A hammer? How the heck did we get from advanced technology to hammers?
Well I'm a simple country girl. Really, grew up in farm country, stopped eating Chicken for a goodly while when I was a child because I made the connection to my little friends vanishing and food on the table. A hammer is a simple device that does something really well. It drives nails, and in the case of a clawfoot, pulls them out. That's what it does. Simple, straight forward and
effective. Bigger nails? Get a bigger hammer. It is a very simple idea, a tool that works and doesn't need an advanced science degree. A Hammer does.
When I was growing up in the country, we had a box on the wall, that you checked first to make sure no one else in the neighborhood was using, and then you made your call. That's all it did.
Back in the early eighties, I got my first portable phone that was wireless. Big brick of a thing that fit in either a big shoulder bag, or could be mounted in your car. Pick it up, dial, if you've got coverage, the call goes through and the rates were insane. But it was a phone. The shoulder bag? Well my purse with all it's crap in it is way smaller and lighter than my first cell phone. But it worked great as a phone and that was what mattered.
So now I have this tiny little phone that is something right out of Star Trek Next Generation, and happens to be a "Droid" phone. So today I decided I'd see just how close to reality the commercial was. After all, we all know how advertisers can, shall we say, embelish things? So,
first, for those who've not yet seen it, here's a quick clip from Verizon talking about their Droid phone and how it finds things:

So my question of course was how much of this is real, and how much marketing hype? I mean I've had a GPS in the car for quite some time, but it's slightly older, and more work to use than the one in my head. Yes, I know, GPS in her head? What? Is she cybernetic with some sort of top secret scifiesq wet ware jacked into her brain? No, not so much. I just have this scary amazing sense of direction, and an intuitive grasp of things. Plus as a child, having had too much time on my hands and wanting to stay out of trouble, I studied things. Like Maps. I only wish I was kidding. So I can get to pretty much anywhere, from pretty much anywhere, and you can, as my father used to do when I was a child, blindfold me, drive me out into the middle of know where and see if I could find my way home. Anyway, I digress. I wanted to find the nearest branch of my bank to where I was, and wanted my Droid to tell me how to get there. First I should state that I do not have a Verizon Droid. 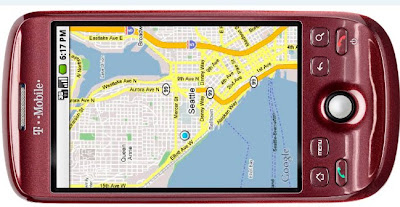 So I hit search, told it to find my bank and hit navigate. Wow. Exactly like the commercial. Turn by turn voice directions, and it even recovered very nicely when I drove right past one of the turns. This was the big issue I'd had with my Garmin GPS. Aside from the fact that every time I wanted to go somewhere I had to hook the Garmin to my computer, load in all the maps, program in the route, and then put it into the car to use it, it was much more user intensive in the field. With the Garmin I had to be watch the screen constantly to see where I was supposed to turn, and the closest to an audible indication I could get to an upcoming change was a beep, and then direction flashing on the small monochrome (and hard to read) screen. When driving a car, not the safest thing in the world to be doing. So the Garmin never really got used for driving directions and could never be used for spur of the moment, find me the closest branch of MY bank. Nope, Garmin could not do that. It didn't know where my bank branches are, that was something I'd have had to program in first. As a hammer, the Garmin failed. Don't even try to consider it a Droid, because a Droid by definition is supposed to be able to do all that for me. Especially given the commercial right?
Well I'm pleased to say as hammers go, this one is a top of the line, chrome plated, Droid! Hit the search button, told it to find my bank, gave me a list of choices closest to me, let me pick one at random, and then took me right to it with voice directions. Periodically I looked at the screen to see what it was showing, but more important was the voice that said "In 1/4 mile turn left onto Linden Blvd" and then as the turn was coming up, "Turn left onto Linden Blvd now" as I was driving along. The big test came when I decided to see just how smart my Droid was and drove right past the turn I was supposed to take. This was another point where my Garmin would get hopelessly flummoxed. I'd be off track and it would have no idea what to do since it wasn't programmed for that. My Droid on the other hand recalculated the route and calmly said "In 1/4 mile make a u turn at Obrien Ave." like nothing had ever happened. Executed the u turn and the Droid informed me I'd now be turning right onto Linden Blvd like nothing at all had happened.
As hammers go? Very, very, smart hammer. Finally a GPS that will really take me where I want to go, even if I have no idea where that is. Later in the day I told it to find my the nearest post office in Indiana. Again no fuss, muss or bother, told it what I wanted and it told me where to go and how to get there. Twice during the journey I specifically made bad turns to see how or if it would recover. As it happened, flawlessly recovered each time without my having to wait while it collected it's whits. During the drive to the post office I happened to come upon a location that my intuition told me was the location of a geocache. I'd not set out to go geocaching that day, and didn't have the detailed cache information with me. No worries, opened a browser (yes, a web browser on my Droid) bulled up the details and set about grabbing, signing, and replacing the cache near a ski resort in Southern Indiana. 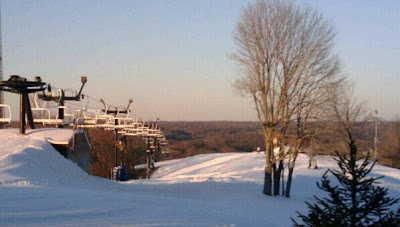 Yes, a Ski resort known as Perfect North Slopes right in southern Indiana. Despite not having had any real snow here this season, the snow machines had been working overtime to lay down a nice usable base of fresh snow. Not only did my Droid serve to get me here, but took this image and cropped it down to my specifications to include in this article. Pretty spiffy.
When done sightseeing and geocaching I got back into jumper one, and switched page over to the Navigation screen, patiently waiting for me to continue on my journey. Took me right to the post office now that I was done messing around. Got my stamp, mailed my letter and was back on my way to the rest of my planed activities for the day. Does Droid search for things and then take you there? It does!!!
Posted by Samantha Shanti at 21:40