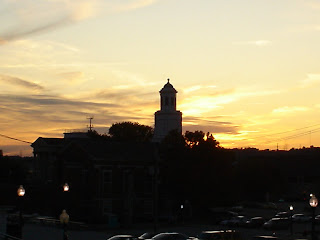 . . .yes, I know, the Mommas and the Pappas sang about Monday, but this made me laugh, plus Sunday didn't leave me crying.

Sunday was "amazing" in that I did something I'd not done in years, and wasn't certain I'd ever be able to do again. Most significant in it's amazingness, was that it was so normal.

Yes, doesn't much figure does it that an amazing day could be normal.

Vicky Jo thinks all my days should be amazing, and frankly I agree. I just have to get there. But have a day be amazing because it's normal? Wait, What?!

Sunday started with a rather interesting dream that took me by surprise. I was having a celebratory breakfast with Danny Glover and his wife. It was the end of a longish road to recovery for him, In ways, the luxury of going out to a nice normal breakfast for him was amazing. You see in his dream, he'd had a stroke of some sort, and I'd sat with him, treating him with Reiki, Hypnotherapy, and Counseling to help him heal and grow past the event. It had taken time, and despite his initial belief that his life was over, he made an amazing recovery.

So at breakfast he was lavishing the praise on me for being a miracle worker and doing something the doctors said would never happen. To his view, I'd given him his life back. I smiled and said that he'd taken his life back, I just helped him see the light, walk the path, and invest in his own future. Me of course I was enjoying spending time with Danny Glover beacuse well he's just a nice down to earth guy who knows how to have fun. I'll admit it, I'm a fan of his. So we were having this mutual admiration thing going on over breakfast. His wife jokingly suggested we just get a room.

Anyway, waking up after that dream wasn't such a bad thing. I'd done good, and helped someone find their way back to the land of the living. Good way to start a day.

Many years ago, before my life had ended, or at least life as I knew it, I'd started a hobby/sport? Geocaching is a modern day "treasure hunt" that uses GPS receivers to find "caches" of stored trinkets. The GPSR will get you so close, and then you've got to find the cache from there. What I love most about it is the sense of accomplishment, and that it gets me out of the hose and to places I'd never otherwise go. Some of the best hours I had in terms of "stress management" was spending a couple of hours hunting for caches. I've found myself in lovely parks, going on walks that were refreshing and beautiful. With everything else, I'd lost this part of my life a while back.

Recently I had to upgrade my phone, the phone I had was three years old, and in part, I had Apple iPhone envy, so just any phone wasn't going to work. There was also the limitation that for several years now my internet connection has been through my phone, so just any phone wouldn't do. There's also the matter that my current phone was only 2g, and 3 was out, with 4g coming the beginning of the year. I needed to upgrade. I'm also not as, shall we say, financially well off as I once was, and could not afford to switch to AT&T. Lastly, T-Mobile had recently recognized my loyalty as a customer buy giving me the unlimited calling plan for half off what everyone else pays for it. I didn't want to lose that. So, it had to be a data capable phone that was just like the iPhone Plus, this phone is a yummy Merlot color instead of black with silver trim. So yes, it appealed to my aesthetic tastes too. 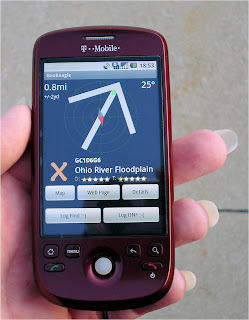 Thankfully, T-Mobile had something that fit the bill. So for just the upgrade price of the headset, and keeping my monthly billing where it was, I managed to get all the yummy, touch screen, applicious goodness without the huge expense in terms of money. Over simply put, anything the iPhone can do, my new phone can do too!

"Yes Samantha, there's an app for that."

One of those apps let's me turn my phone into a high end GPSR. And once again I'm caching again! Well, that's assuming I can get out of the house, deal with people, and being outside, and noise, and, and, and . . . yeah, it really is like that sometimes. One of the caches I went hunting for was the Ohio River Floodplain in Indiana. So Sunday, yes dear reader we are back to Sunday once again, I decided I was going to go caching again. I'd already managed some on Saturday, and wasn't freaking out or anything, so I thought I'd give it a try again. I saved the Ohio River Floodplain for last. Figuring that because of the nature of the cache, I'd have least managed to get two before this one if this was more than I was up for. So, I hit the first two and got them out of the way fairly quickly. Well except for driving in circles on the "Gold" level of a parking structure trying to get to the "Purple" one. I hit the first two, then went and had a bite to eat, in the restaurant, and then was on my way to the last cache of the day, and what promised to be a nice sunset over looking the Ohio River. How bad could THAT be? 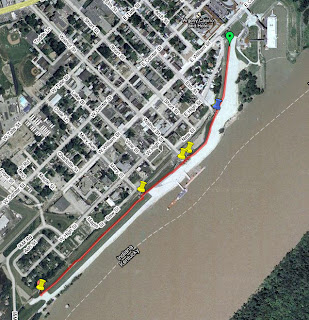 Well as it turned out, not bad at all. Very not bad! Was actually really good. Sunshine, fresh autumn air, the leaves starting to change, and what was all in all a two mile walk. You can get a general idea from the little map to the left that shows the start point and end point of one leg of the trip. I started at the green marker, walked up to the last yellow marker, and then back again.

Aside from collecting the data (this was a special kind of cache, and earth cache) I was enjoying the view, the fresh air, sunshine, and learning more about the town of Lawrenceberg, Indiana. Like the massive repeated destruction it suffered from a number of horrible floods over the years. The entire reason the levee was built in the first pace. In 1937 for example, the entire town was under more than fifty feet of water. It was one of a number of times over the years this happened.

There was also the small matter of the sight seeing. Of course there was the lovely sunset (top of post) that I just stood there enjoying while breathing the crisp fall air. It was dark by the time I could pry myself away, thankfully the whole area was well lit board walk style.

I'd made it through the entire day without the background noise of my past that pervades my head and heart. One very brief, but thankfully minor flashback that I managed to push away and get back to enjoying the moment I was in. I was focused on being entirely present, in that moment on top of the levee, making new memories of a time beyond the pain and destruction of my past. I was living the Zen Koan:

"Put no distance between you, and where you are."
And that's exactly what I'd spent the day doing. Meditation without sitting still and not thinking, instead, mindfulness, being in that moment, that place and time I might never have been to were it not for geocaching. I took a nice leisurely drive towards home, stopping to do some grocery shopping and thinking about nothing more pressing than what I was going to make for dinner. It was a normal, relaxed, fall Sunday, the likes of which I'd not had in more than a decade. And that to me was AMAZING! 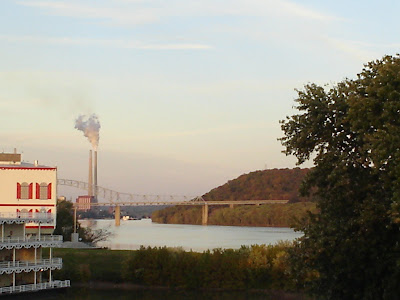 Posted by Samantha Shanti at 18:04

I know, commenting on my own blog, two years later? Come on, really, what gives?

So I'm talking to my friend Vicky Jo who is mentioned in this blog, and something she said made me think about how the technology she was imagining already existed. So, this comment is a quick shout out to Vicky Jo, and to let her know that not only can she and others comment on a blog, but that people who make blog posts, or people who comment on blog posts, can receive automatic e-mail notifications of updates or comments by simply clicking on the "Email follow-up comments to" box below.

Easy peasy, all kinds of light and breezy!

Tools to make your visions come to life! So this comment is just for Vicky Jo! May all your days be amazing like you!